These are my current available talks, webinars, and workshops. I speak at national and international library and information technology conferences as well as library consortia, and many other venues. I offer 60-90 minute technology talks, as well as half, full, and 3-day workshops, and live webinars.  I also have a large online audience – over 300,000 views of my online presentations on Slideshare.

Virtual Services in the Library: Synchronous and Asynchronous Events

Learn how to teach with technology and provide library patrons with exciting remote instructional events ranging from screencasts, slidecasts, podcasts, side-by-side tutorials, and teaching live. Tour the latest technologies such as Zoom, Camtasia Studio, and LibWizard as well as hosting platforms, and marketing outlets.  Learn about how to host engaging live and pre-recorded sessions, what to do in post-production, and how to analyze metrics to inform future sessions.

Learn how to create engaging virtual programming ranging from virtual storytimes to virtual maker activities to cat cafes.  Offer your patrons remote language and career programming, author talks, and writers programs using technology such as Zoom, Facebook Live, Youtube Live, and Instagram Live.  This session will discuss specific guidelines for holding live sessions, post-production tips, instruction on where to embed and market your media, as well as how to stream your events to multiple outlets simultaneously.

Learn how to create enticing virtual gaming programs for your library patrons ranging from video game tournaments, Dungeons and Dragons online, virtual escape rooms, scavenger hunts, chess tournaments, and more.  Learn about the latest technology such as Twitch, Discord, Roll 20, and GoogleSites and how to use them to design winning game programs.

The cyberthreat landscape has expanded across all sectors of business and industry and has now grown to include libraries. While most libraries have IT measures in place to ensure cybersecurity it is oftentimes not enough to combat today’s evolving cyberattacks.  What can you do to help your library fight this very real threat?  Learn how to spot phishing attempts like a hacker in this interactive webinar.  Educate yourself about password management, social engineering, computer security, and protecting the data you’re handling.

How to Create Free Digital Breakouts for Libraries

Digital breakouts are immersive online experiences not unlike their wildly popular counterparts, escape room games.  These interactive diversions pose exciting challenges for players to overcome and along with them opportunities for libraries to impart learning outcomes and skill sets. Explore the ins and outs of setting up these engaging games for patrons and students.  This webinar discusses all of the details of how to set up Google sites to host games, Google forms for creating virtual locks to challenge patrons, what types of puzzles to create, how libraries are already using them, etc.  Here is just one example: https://sites.google.com/view/draculascurse 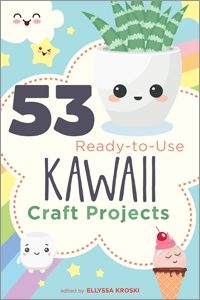 According to a recent Library Journal survey of 7,000 public libraries, craft programs are the number one most popular maker activity offered in libraries.  Get inspired and learn all about the essential tools and technologies used in today’s crafts programming and how you can host engaging craft programming in your library whether you have a dedicated makerspace or not!  Teach patrons how to create “super cute” crafts such as felties, plushies, fluffies, stickers, jewelry, charms and more using an array of materials and tools ranging from 3D printers to vinyl cutters, to polymer clay!

DIY Escape Rooms and Other Immersive Experiences in the Library Webinars 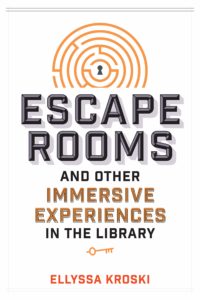 Escape rooms are immersive, live-action games in which a group of participants enter a room where they must solve puzzles and collect clues in order to “escape” or win the game. These engaging and captivating games can be designed around nearly any theme from zombies to pirates to detective dramas and are being used by libraries in a multitude of ways. They can be employed simply for outreach and to engage library patrons, for incorporating instruction and experiential learning outcomes, as well as for internal staff team-building and training. You too can create this type of captivating programming for your own library for both promotion and education! 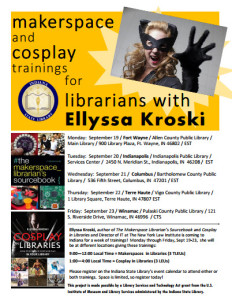 Makerspaces in Libraries Workshops and Webinars

Makerspaces are creative, DIY spaces where people can gather to create, invent, and learn. In libraries they often have 3D printers, software, electronics, craft and hardware supplies and tools, and more.  Forward-thinking libraries are already building their own dedicated makerspaces and developing valuable STEM programming based on the tools and technologies found therein.  Learn all about the essential tools and technologies found in makerspaces and how you can host engaging STEM programming using tech such as Raspberry Pis, wearable electronics, virtual reality, and robotics in your library whether you have a dedicated makerspace or not! 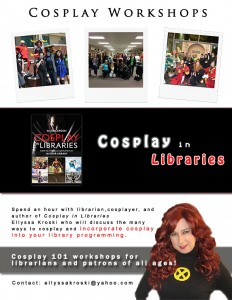 Cosplay in Libraries Workshops and Webinars

Cosplay, comics, anime, and geek culture have exploded into the mainstream over recent years and have resulted in a thriving community of costume enthusiasts and pop culture fans.  Libraries on the leading edge are already embracing this new worldwide sensation by integrating cosplay into their programming and events. Learn all about the world of cosplay and how you can host cosplay events, workshops, makerspaces, clubs, and more in your library!  Workshops for librarians and/or library patrons of all ages! 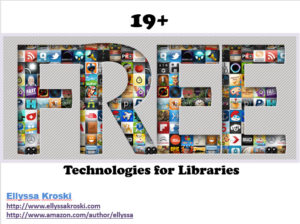 Libraries are continually faced with the challenge of making the most of their budgets while progressively increasing efficiency and library services.  Learn about the benefits of many different types of free software and open source applications to improve your internal operations, market library services, and encourage staff collaboration.  Find out what types of free applications are available for electronic resources management (ERM), private intranets, reference statistics tracking, email management and more in this informative session! 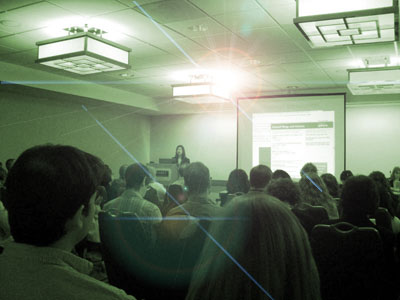